Documenta: The Battalion of Caçadores n.º 8 in the Battle of Vitoria

In the battle of Vitoria, the Portuguese Caçadores battalions were committed very intensely over the course of the day, always fighting in the vanguard of the allied columns. Seasoned by the campaigns of the previous three years, they showed great discipline and combat effectiveness, asserting themselves as the Portuguese units most respected by friends and feared by the enemy.

(Soldier from the 6th Caçadores, by Ribeiro Arthur)

We highlight the 8th Caçadores Battalion, one which suffered the most casualties in the battle of June 21, 1813, and that earned the public commendation of lord Wellington, allied commander in chief, in the dispatches he sent to the Portuguese and British governments.[1]

In Vitoria, the 8th Caçadores was commanded by Lieutenant Colonel Dudley St. Leger Hill, and was part of the Portuguese brigade commanded by brigadier William Spry, aggregate to the allied 5th Division, of General Oswald. This division was part of the allied corps which Wellington had detached to attack the right wing of the French line, backed in the Zamorra river, and to cut the road that connected Vitoria to France, the main line of retreat for the French. This corps, which formed the left wing of the allied army, was under the command of general sir Thomas Graham and was constituted by the two Portuguese independent brigades, the 1st and 5th divisions, Longa’s Spanish division and British artillery and cavalry.

To contextualize the action of the battalion we present an excerpt from the report sent by general Graham to Wellington after the battle:

«The enemy had a division of infantry, with some cavalry advanced on the great road, resting their right on some strong heights covering the village of Gamarra Maior. Both Gamarra and Abechuco, on the great road, were strongly occupied as têtes du pont to the bridges at these places over the Zadorra. Major-General Pack with his brigade of Portuguese infantry, and Colonel Longa with his Spanish corps, were directed to turn and gain these heights, supported by Major-General Anson’s brigade of Light Dragoons, and the 5th division of infantry, commanded by Major-General Oswald, who was requested to take charge of all these troops.
In the execution of this service the Portuguese and Spanish troops behaved admirably. The 4th battalion of Caçadores of General Pack’s brigade, and the 8th Caçadores of the 5th division, particularly distinguished themselves.» 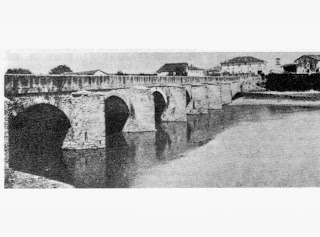 We leave to lieutenant colonel Dudley St. Leger Hill the more detailed description of the action of his caçadores, in the report he sent to brigadier Spry, from the original in the Arquivo Histórico Militar, 1ª Divisão, 14ª Secção, Caixa nº 243, 18, ms 6 to 8.

Being detached from your brigade in the action of yesterday I have the honor to report to you for the information of his Excellency Marshall Sir William Beresford that I was ordered by major general Oswald to place the 8th Caçadores under the imediate direction of Brigadier General Pack and in conjunction with the 4th Caçadores drive the enemy of the heights they occupied in front of the left column of the Army. This order was carried in to execution with the greatest promptitude and I cannot say sufficient in praise of the gallantry and forwardness of my men and officers. The heights we had to ascend were difficult of access and the fire of the enemy was very heavy yet did we succeed in driving the enemy from the different hills they successively occupy and obliged them to retire beyond the river [Zadorra].
The conduct of the battalion in pursuing the enemy afterwards on their retreat was no less conspicuous, having advanced in front of the various lines of columns of the army in conjunction with the 4th Caçadores driving before them the enemy numerous light troops of infantry and cavalry. As general Pack will of course make a report to his Excellency on the conduct of the troops engaged under his command I beg you will refer his Excellency to his Report and that you will have the goodness to mention in yours, your opinion of the conduct of the battalion in the first part of the engagement could not have escaped your observation.
The officers of the battalion behaved with the greatest gallantry and to recommend those who distinguished themselves would be to ?  the whole. I have however to beg you will report to his Excellency the extreme brave and gallant conduct of the sergeant major of the battalion who in all occasions during the day distinguished  himself by heading the advance of every company and exhibited the greatest coolness and judicious  arrangements in placing those intrusted to his command. The name of the sergeant major is Domingos Lopes, who has before been recommended for good conduct.


Note 1: It is possible to consult the map of the battle of Vitoria in the website Napoleon Series.

In the spring of 1813, a single grand army gathered, 100,000 strong, under the command of General Sir Arthur Wellesley, Marquis of Wellington, made of Portuguese, British and Spanish troops involved in the war against the French in the Iberian Peninsula. They were commanded by experienced generals, of proven valour, like Beresford, Hill, Picton, Cole, Alten, Clinton, Stewart, Hope, Graham, Silveira, Lecor, Longa, Carlos de España, among many others. We commemorate, with this blog, the bicentennial of the events of 1813 and 1814, these brave men, their toils and efforts.